Saint George and hys Many Enemies
Everyone's favourite tale of swashbuckling, valour and heroics. With a virgin to protect, Saint George must face a fierce dragon, Beelzebub himself and Salladin the Saracen Knight. There are swordfights, fire blowing, juggling, lots of jokes and some audience participation - we expect you to cheer on George of course, boo the baddies, and you may even be called upon to help choose the cast!
Interlude of Youth
Supposedly based upon the life of young Henry VIII. Youth falls into bad company (and that's not just the acting) and faces eternal damnation in the fire pit of hell - as cautions are not the stuff of drama. Can he save himself with the help of Charity's plentiful salvation? Roasted nuts available after the performance.
Pardoner's Tale
Greed is the downfall of the three dullards featured in this play from Chaucer's Canterbury Tales.. Their alcohol fuelled bravery to challenge death soon turns into a tale of murder. Death has many guises. 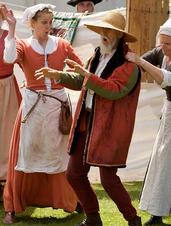 Reeve's Tale
Another offering from Chaucer - this time the author himself makes an appearance. It's a tale of mistaken identity, partner swapping and hilarious domestic violence narrated in medieval Gujarati.
Chanticleer and the Fox
You'd better brush up on your farmyard noises for this one - we need your help. With plenty of involvement from the audience, Melford hys Companie brings you Chaucer's tale of an arrogant cockerel and his downfall. Not one for those with feather allergies.
Mankind
Distilled from the three hour original to 20 minutes. The road to damnation is paved with good intentions. The demon Titivillius is raised to condemn a God fearing fellow from the righteous path. Will he fall or keep on the straight and narrow?

Noah and the Greate Floode
The wrath of God, the stoicism of one family and the origins of the  plank routine. May contain animals
Robin Hood
You know this one....
Powered by